As part of a consortium headed by Manfred Milinski, we carried out comparative & population genomics analyses and immunological transcriptomics to assess the extent of genome-wide differentiation among pairs of lake-river ecotypes. Results indicate that selection is a major contributor to the observed heterogeneous patterns of genomic divergence, and that structural variation substantially contributes to genetic variation. Young genes such as recently duplicated genes are overrepresented among copy-number variations (CNVs), and are enriched with functional roles related to environmental response. These young duplicates provide ample raw genetic material that may be used for adaptation to novel environments. 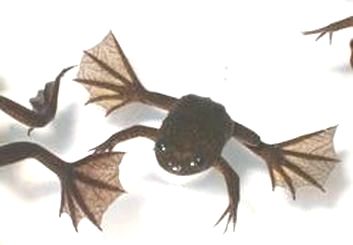 Photo of Xenopus by Ben Evans
Gene and genome duplications can facilitate genetic innovation, reduce pleiotropy and catalyze reproductive incompatibilities and speciation. Therefore, the molecular and transcriptional fate of duplicate genes play important roles in the evolutionary trajectory of populations and species. 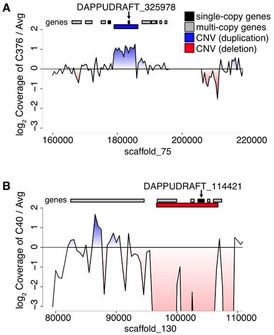 Environmental factors such as radiation and sunlight are known to cause mutations. Despite the interest in understanding long-term health effects of such stressors, little is known about the extent to which stressful environmental conditions accelerate mutation rates and the genetic load of populations. Moreover, most studies on mutation rates focus on point mutations rather than large-scale deletions and duplications (copy-number variations or CNVs), which have mutational mechanisms potentially more readily induced by stress.

Work in Melania Cristescu's lab was conducted with Daphnia mutation accumulation (MA) lines, permitting us to directly detect all but sub-lethal mutations due to repetitive bottlenecking that reduces effective population size. MA lines that were exposed to the highest levels of heavy metals showed significantly higher rates of large-scale mutations, potentially caused by an increase in error-prone double strand break repair. Compared to MA lines, isolates evolving in a non-MA population had far fewer mutations, including point mutations, suggesting that selection on new mutations is strong in small populations.